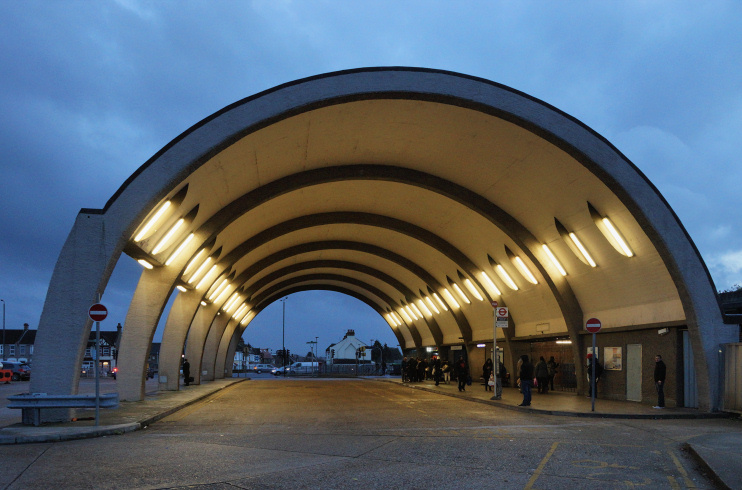 The manor of Newbury was part of Barking Abbey’s extensive land­hold­ings in the Ilford area until the disso­lu­tion of the monas­teries, when Henry VIII granted it to Sir Richard Gresham.

The land remained in wholly agri­cul­tural use until the late 19th century, when the first suburban houses were built, together with a primary school.

In 1903 the Great Eastern Railway Company opened the Fairlop loop, which linked Woodford with a junction on its main line between Ilford and Seven Kings. This was a spec­u­la­tive project based on the assump­tion that Ilford’s housing boom would bring continued northward expansion, and a substan­tial station was built at Newbury Park in antic­i­pa­tion of heavy traffic.

A new school was provided and 142 house plots were offered for sale on the Newbury Park estate but investors failed to mate­ri­alise. Only four plots were sold (on Hertford Road) at £42 each. It was not until the arrival of the Eastern Avenue in the mid-1920s that property devel­opers filled the district with compact housing.

To the south, the Plessey Company began manu­fac­turing elec­tronic commu­ni­ca­tions equipment on a new site at the junction of Ley Street and Vicarage Lane. In 1936 work began on a tunnel that would link the Central Line with the Fairlop loop at Newbury Park. Construc­tion was halted by the outbreak of war and a Plessey produc­tion line was set up in the tunnel.

At the end of 1947, under­ground trains finally replaced the old steam service and this was accom­pa­nied by the distinc­tive remod­el­ling of the existing station, with an arched concrete, copper-clad canopy for buses (shown in the photo­graph at the top of the page*), which won a Festival of Britain award for archi­tec­tural merit.

Newbury Park has a growing number of residents of south Asian birth or descent, orig­i­nating from all parts of the sub-continent, and they accounted for the majority of the ward’s popu­la­tion at the 2011 census. At Newbury Park primary school around three-quarters of children speak English as an addi­tional language.

* The picture of Newbury Park bus station at the top of this page is slightly modified from an original photograph, copyright Chris Sampson, at Flickr, made available under the Attribution 2.0 Generic licence. Any subsequent reuse is freely permitted under the terms of that licence.