A characterful market street winding in a north-north-westerly direction from Notting Hill Gate, where it branches off Pembridge Road 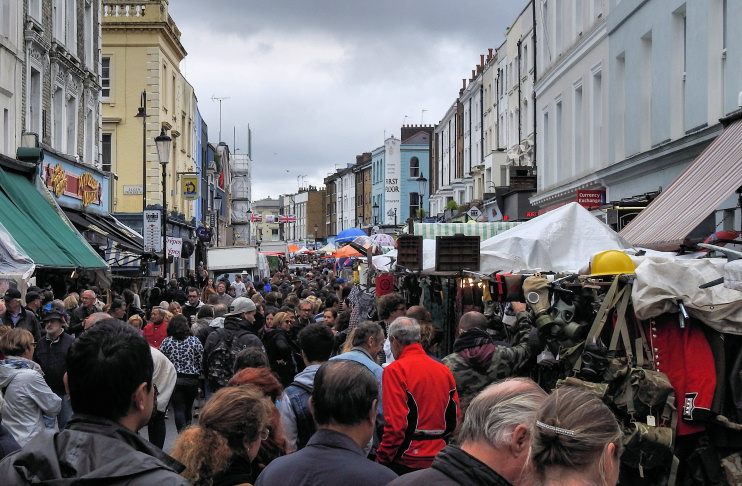 Vice-Admiral Edward Vernon defeated a Spanish fleet at Porto Bello (now Portobelo in Panama) in 1739 and the farm that stood here was renamed in honour of the victory. The country track that traversed its fields was later called Porto­bello Lane.

In 1801 the Grand Junction (now Grand Union) Canal cut across the northern part of the lane, which has since been further truncated by the railway and the rede­vel­op­ment of Kensal Town.

From the mid-19th century the Ladbroke Grove estate progres­sively filled the territory to the south-west and the owners of Porto­bello Farm began to sell off their land for housing. Traders set up shops along the lane to provide goods and services for their wealthy neighbours.

As devel­op­ment slowly moved north­wards (and socially downwards) over the remainder of the century, terraces of working-class housing lined the rest of the road. In 1864 Porto­bello farmhouse was sold to the Little Sisters of the Poor, who built St Joseph’s Convent on the site of its orchard. 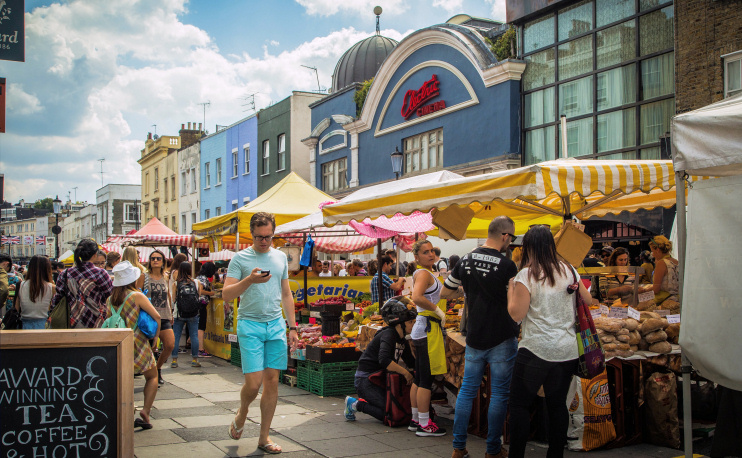 Over the second half of the 20th century the shops and stalls of Porto­bello Road increas­ingly specialised in antiques and bric-à-brac, creating one of the most distinc­tive street markets in London.

The area’s character was further enhanced by the music scene that evolved here from 1969, when Island Records moved to nearby Basing Street. Live music venues and specialist record shops appeared on Porto­bello Road in the 1970s and punk, reggae and later rap and hip-hop artists performed and recorded here and often rented (or squatted) homes in the vicinity.

Porto­bello Road has stalls every weekday and is espe­cially big on Saturdays, when it claims to become the world’s largest antiques market. The photo at the top shows how busy the market can get on a Saturday, even in unsettled weather conditions.

As Julian Mash puts it in Porto­bello Road: Lives of a Neigh­bour­hood: “… in spite of the slow encroach­ment of chain shops and super wealth that has so changed the community over the last fifty years, there remains a unique spirit running through these streets. You just have to know where to look.”

A plaque on the wall of 115 Portobello Road commemorates June Aylward, who established the street’s first antiques shop.

‘Portobello Road’ is a song and dance number in the Disney film ‘Bedknobs and Broomsticks’ (1971), in which the street is crammed with dodgy dealers touting counterfeit relics and forged works of art. As the film is set in the early 1940s – well before Portobello’s antiques specialisation – the entire scene is as fake as the barrow boys’ wares.

On the satellite map below, Portobello Road runs from top left to bottom right, and a little beyond in both directions. Look closely (or zoom) and you can see the canopies of the market stalls along much of its length.

* The picture of Portobello Road at the top of this page is cropped from an original photograph formerly at Flickr, copyright xiquinhosilva, made available under the Attribution 2.0 Generic licence. The picture of Portobello Market and the Electric Cinema is modified from an original photograph, copyright Adrian Scottow, also at Flickr, made available under the Attribution-ShareAlike 2.0 Generic Licence. Any subsequent reuse is freely permitted under the terms of those licences.