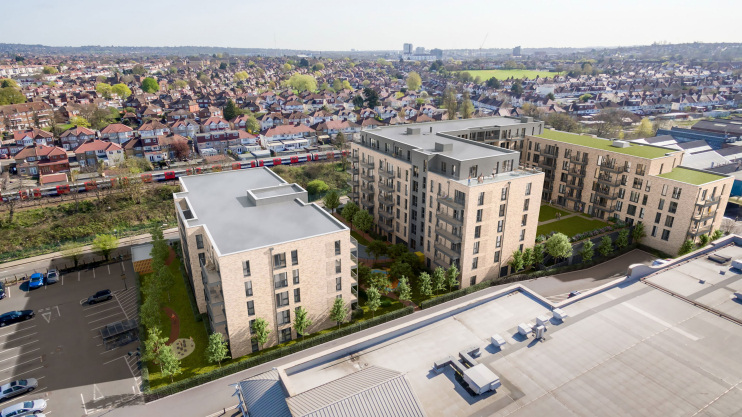 In 1920 Geoffrey de Havilland leased the former London and Provin­cial flying school site and estab­lished his aircraft company at Stag Lane, in what was then defined as Edgware. De Havilland manu­fac­tured numerous famous aero­planes here, including several varieties of ‘Moth’.

In 1934 the company moved to Hatfield in Hert­ford­shire and much of present-day Queens­bury was laid out on the site of the disused airfield. To the west, Honeypot Lane – a narrow track named for its stick­i­ness when wet – was trans­formed into a resi­den­tial and indus­trial artery.

Although the Metro­pol­itan Railway had begun its service to Stanmore at the end of 1932, it was two years before a station was added here, not just to encourage house­building (as was often the case in Metroland) but because so much growth had already taken place. The railway company ran a newspaper compe­ti­tion to devise a name for the station and the winning entry played on the new suburb’s proximity to Kingsbury.

Queens­bury Park opened in 1936 – and 80 years later the mayor of Harrow unveiled a new wetland area here, made possible after the Kenton Brook was widened and diverted through the park. Shops were built in the vicinity of the station, one of which served as a Methodist Sunday school and place of worship until a brick church was opened on Beverley Drive in 1938. Anglicans worshipped in a wooden hut on Waltham Drive until All Saints’ church was conse­crated in 1954, by which time Queens­bury was the most densely populated ward in Wembley borough.

The Essoldo cinema became a bingo hall in the 1960s and has since been replaced by the housing of Essoldo Way, while super­stores have appeared on Honeypot Lane.

Shown in the archi­tects’ CGI at the top of this article, Queens­bury Square is the locality’s most prominent new resi­den­tial devel­op­ment. Fairview New Homes have built nearly 200 flats in three blocks on part of an under-utilised Morrisons car park.

Asians and Asian British – mostly of Indian birth or descent – now make up 57 per cent of Queensbury’s popu­la­tion, with whites accounting for 25 per cent. Hinduism and Chris­tianity are the main religious faiths. Around four-fifths of homes are owner-occupied.

The aviatrix Amy Johnson learned to fly at Stag Lane. In 1930 she became the first woman to fly from England to Australia, piloting a de Havilland Gipsy Moth from Croydon to Darwin. The aircraft is now on display at the Science Museum.