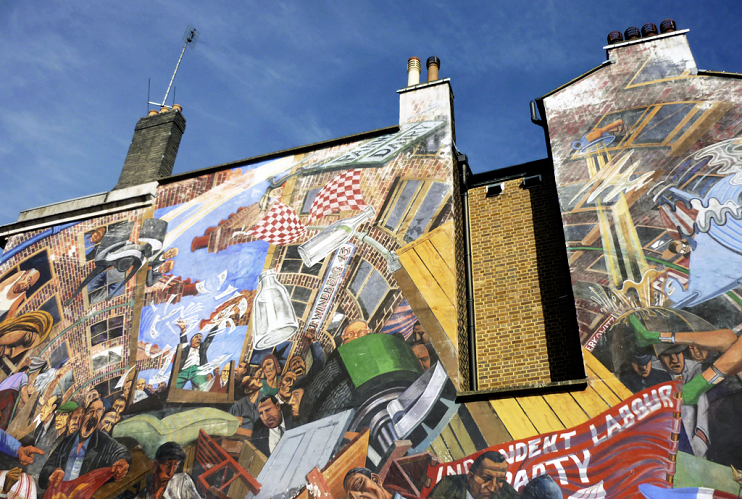 The parish was created in 1729, the year of the church’s comple­tion on Cannon Street Road. St George-in-the-East was one of three East End churches designed by Nicholas Hawksmoor, the others being at Spital­fields and Limehouse.

There was never a recog­nis­able settle­ment called St George-in-the-East, but the parish name provided a useful identity for the formerly anonymous area north of the docks. The central thor­ough­fare was Cable Street, so called for its ropeyards. Two squares and a handful of streets were laid out but market gardens occupied much of the parish until the end of the 18th century.

With the construc­tion of the Commer­cial Road and the coming of railways and heavy industry to the East End, St George-in-the-East became a solidly urban and extremely poor parish over the course of the 19th century.

The Prince of Denmark pub was enlarged in the 1850s to become Wilton’s Music Hall, which survives today as a rare example of its kind.

Jewish immi­gra­tion changed the character of the area from the end of the century, creating a garment district in the north of the parish.

After the First World War the municipal author­i­ties began to build blocks of flats and to provide public health amenities.

In the 1930s Sir Oswald Mosley’s British Union of Fascists attempted to divide Chris­tians and Jews in the East End. Mosley organised a march of 3,000 of his black­shirted followers in October 1936, which was blocked by protesters’ barri­cades at the junction of Cable Street and Leman Street.

A mural painted on the side of the former St George’s vestry hall depicts this ‘Battle of Cable Street’ in heroic fashion. Part of the mural is shown in the photo­graph at the top of the page.*

Following devas­tating bomb damage in the Second World War, St George-in-the-East was rede­vel­oped as an almost entirely resi­den­tial area, including high-rise flats in the 1970s. Subse­quently, Docklands regen­er­a­tion has impinged on the parish, without trans­forming it.

After decades of patchwork repairs and tireless campaigning, Wilton’s Music Hall Trust secured suffi­cient funding to fully restore the Grand Hall in 2013 and the rest of the work was completed in September 2015.

Since August 2015 Cable Street has (inap­pro­pri­ately and contro­ver­sially) been home to the Jack the Ripper Museum.

The Men They Couldn’t Hang’s rock-folk song ‘Ghosts of Cable Street’ recalls the events of 1936.

Ensign Street and Grace’s Alley were used as locations for the 1994 film Interview with the Vampire, starring Tom Cruise and Brad Pitt.

* The picture entitled Graffiti de la ‘batalla’ de Cable Street at the top of this page is slightly modified from an original photograph, copyright Joan Sorolla, formerly at Flickr, where it was made available under the Attribution 2.0 generic licence. The picture of the parish church of St George-in-the-East is adapted from an original photograph, copyright Stephen Richards, made available under the Attribution-ShareAlike 2.0 generic licence. Any subsequent reuse of either image is hereby freely permitted under the terms of the relevant licence.