A residential and light industrial enclave located beside the River Wandle, where Tooting meets Wimbledon 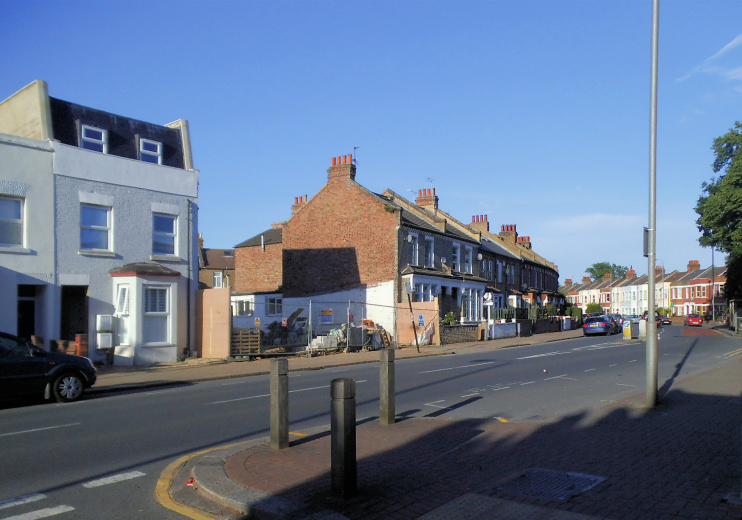 The road named Summer­stown links Plough Lane with Garratt Lane. From the late Middle Ages there were mills beside the river, which frequently flooded the area.

‘Dutchmen’ are recorded as manu­fac­turing brass plates for kettles and frying pans around 1631 and there is also evidence of Huguenot silk weaving and wig making here. In the 18th and early 19th centuries the hamlet provided labour for the Wandle’s mills.

The hamlet of Garratt, which Summer­stown has absorbed, was once famous for its mayoral election hustings, which were conducted in such a frivolous manner as to attract crowds of tens of thousands. The ‘mayor’ was really the chairman of an asso­ci­a­tion of villagers formed in the 1740s to resist encroach­ments on Wandsworth Common.

The writer and poet Edward Thomas cycled through Summer­stown just before the outbreak of the First World War and described the scene in his evocative trav­el­ogue In Pursuit of Spring:

“The main part visible was twenty acres of damp meadow. On the left it was bounded by the irregular low buildings of a laundry, a file and tool factory, and a chamois-leather mill; on the right by the dirty backs of Summer­stown. On the far side a neat, white, oldish house was retiring amid blos­soming fuit trees under the guardian­ship of several elms, and the shadow of those two tall red chimneys of the elec­tricity works … A mixture of the sordid and the delicate in the whole was unmistakable.”

Summerstown’s Romanesque parish church of St Mary was completed in 1920 and is now grade II listed. Its location is marked with a pin on the map below. The Summer­stown 182 Project is “an attempt to build a picture of this much-changed community as it stood one hundred years ago … through the stories of 182 men who made the ultimate sacrifice.” Their names are inscribed on the 1914–18 war memorial at the church.

When the St Clement Danes charity moved to new almshouses in Sydenham in 1966 the Summer­stown almshouses were purchased by the London Borough of Wandsworth and became council housing. To their south, the council built the Hazel­hurst estate in 1969–73. The estate is dominated by two 15-storey blocks: Chill­ing­ford House and Hayesend House.

Having absorbed Garratt, Summer­stown is now itself in danger of being lost within Earls­field. Contem­po­rary house­builders in the Garratt Green area claim that this is Earls­field, despite the SW17 address.

Marc Feld, later to become Marc Bolan, moved with his family to one of the new Sun Cottages in Summerstown in 1962. This was a comedown from the street cred he had enjoyed when living in Stoke Newington and he spent as much time as possible in the clubs of Soho.

* The picture of Garratt Lane at the corner of Keble Street on this page is adapted from an original photograph, copyright David Howard, at Geograph Britain and Ireland, made available under the Attribution-ShareAlike 2.0 Generic Licence. Any subsequent reuse is freely permitted under the terms of that licence.