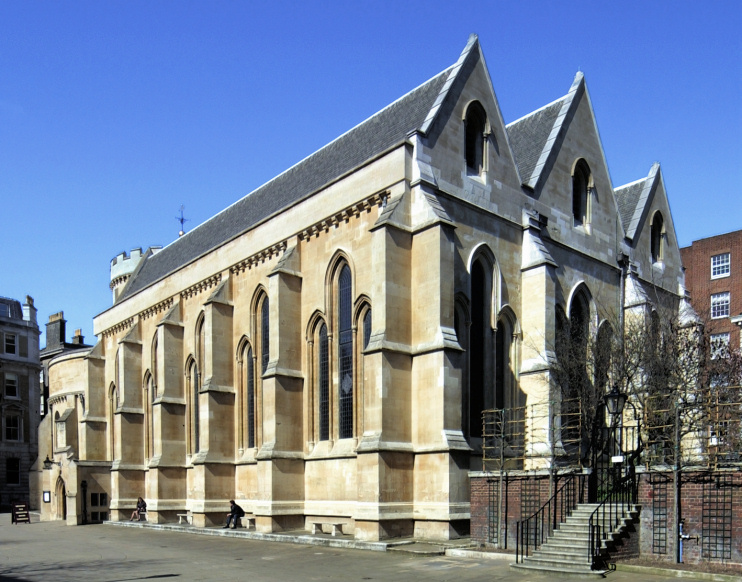 Crusading military order the Knights Templar estab­lished a church and resi­den­tial quarters by the River Thames around 1160. Shown in the photo­graph above, Temple Church was built in two phases and completed in 1240. The order’s clergy lived in a conse­crated precinct on the east side of the church.

The Templars’ order was suppressed in 1312 and parlia­ment voted its buildings to the order of St John of Jerusalem, which leased them to students of law. There is some debate about when, why and even if the college divided itself into two halves. The usual expla­na­tion is that sometime in the late 14th or early 15th century the lawyers agreed on the split for admin­is­tra­tive purposes. Another theory holds that there were always two separate societies, which later came to be called the ‘Inner Temple’ and ‘Middle Temple’ because the former lay nearer the City, while the latter occupied the buildings in the middle of the complex.

Most of the medieval buildings were destroyed in the Great Fire of London, and in three subse­quent fires in the second half of the 17th century, and the Temple was after­wards rebuilt to a more colle­giate plan. The grounds were extended south­wards with the construc­tion of the Victoria Embank­ment in 1870, when Temple station opened.

The Temple and its church were badly bomb-damaged during the Second World War. Some struc­tures were after­wards completely rebuilt as facsim­iles of their prede­ces­sors, including the Inner Temple’s Master’s House, which is just about visible through the verdant gateway in the photo­graph. Elsewhere, sensitive restora­tion has preserved the other-worldly intimacy of the enclave, where the court­yards are still illu­mi­nated by gas lamps.

Law is no longer taught here and barris­ters’ chambers occupy most of the buildings. Both the Inner and Middle Temples offer pre-booked guided tours for groups. Concerts are regularly organised in the Temple Church and the Inner Temple’s three-acre garden is normally open to the public from 12.30 to 3.00 each weekday.

Television companies have made frequent use of the Temple, in productions as diverse as the BBC’s David Copperfield and ITV’s The Bill. Temple Church gained international fame for its role in Dan Brown’s novel The Da Vinci Code.