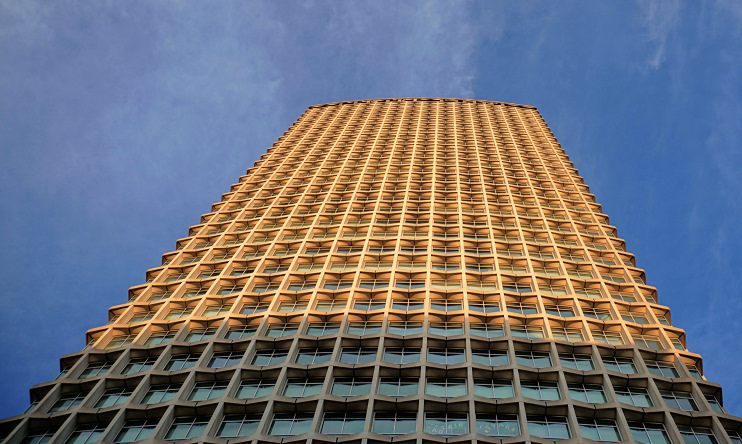 Centre Point is a massive and formerly contro­ver­sial 36-storey block over­looking St Giles Circus, at the northern end of Charing Cross Road, on the corner of New Oxford Street.

It was built by the property spec­u­lator Harry Hyams in 1963–7 to the designs of Richard Seifert and Partners. Because of an economic downturn much of it remained empty for several years, with Hyams content to benefit from the esca­la­tion in its capital value while he paid no rates. The structure thus gained a repu­ta­tion as a monument to the evils of capi­talism and a hundred squatters occupied it in 1974.

Commer­cial tenants were even­tu­ally found, including the Confed­er­a­tion of British Industry, but Centre Point never achieved its full potential as a London icon – partly because the area around the base of the tower was so badly laid out. At ground level, Centre Point became a place to avoid unless you had reason to be going inside.

Devel­opers Almacantar acquired Centre Point for £120 million in 2011 and soon announced that “the building is in need of major repair and refur­bish­ment to ensure that it can remain safe and open.” The company proposed to adapt the tower for resi­den­tial use, arguing that Centre Point was “designed for an era of type­writers and tele­phones, secre­tariat pools and filing” and could not be cost-effec­tively converted to meet modern business needs because of restric­tions imposed by its grade II listing.

The planned resi­den­tial conver­sion did not include any provision for afford­able homes. Almacantar later sought to deflect objec­tions in this regard by proposing to build a block of 16 flats (ulti­mately 13) on the site of the former Intrepid Fox pub, which it bought in September 2012.

Camden council’s planning committee granted permis­sion for the project in July 2013. Almacantar chief executive Mike Hussey was quoted as saying: “We intend to transform the way Londoners view and interact with Centre Point, while always staying true to its heritage. Our ambition is to ensure the scheme is re-estab­lished as a landmark desti­na­tion that Londoners can be proud of.”

Almacantar quickly secured a £220 million loan from the invest­ment company Starwood, which guar­an­teed that the project would be completed as planned. Centre Point now contains 82 luxury apart­ments, with the double-height penthouse valued at around £50 million – according to the Daily Telegraph – more than twice the figure quoted when the project was first mooted.

Taking advantage of the arrival of the Elizabeth line at Tottenham Court Road station, a south-facing public space has been created – inevitably accom­pa­nied by shops and restaurants.

An in-depth article in the Archi­tects’ Journal [regis­tra­tion required] praises almost every aspect of the project (except the Centre Point Resi­dences rebranding), including White Lion House, the adjacent social-rent housing, built for Camden Council as a condition of planning permis­sion, and the new public space – St Giles Square. “An intel­li­gent attempt to shift this area percep­tu­ally from isolated point block to inhabited public amenity,” is the article’s verdict.

Iron­i­cally for a building that noto­ri­ously stood unoc­cu­pied for so long, Almacantar temporarily halted formal sales of the flats in Centre Point Resi­dences at the end of October 2018 after receiving too many “detached from reality” lowball offers. The decision left around half the units lying empty. The company started marketing prop­er­ties again in June 2019. 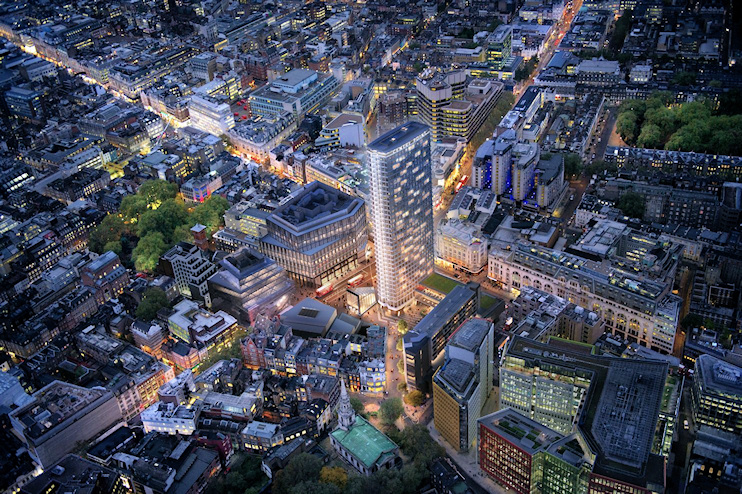