Florence and other nurses (and their pets)

The founder of modern nursing, Florence Nightin­gale was born into an upper-class British family on 12 May 1820 and named after the city of her birth. Nightin­gale was partly self-taught but also trained at the Kaiser­swerther Diakonie near Düssel­dorf. In 1853 she took up her first profes­sional position – as super­in­ten­dent of a gentlewomen’s nursing home at 90 Harley Street, where a stone plaque now avers that “Florence Nightin­gale left her hospital on this site for the Crimea, October 21st 1854.”

In fact, she went first to a temporary military hospital at Scutari (now Üsküdar, a munic­i­pality of Istanbul), with a team of volunteer nurses. Here she began her pioneering efforts, espe­cially in improving standards of sani­ta­tion and nutrition, thus reducing avoidable deaths. The Crimean campaign has been called “the first modern mass media war” and coverage in the British press made Florence Nightin­gale a national heroine – and helped her raise the funds and gain influ­en­tial support to augment her work, both during the war and afterwards.

Following her return to London, Nightin­gale wrote a seminal book entitled Notes on Nursing and in 1860 estab­lished a nursing school at St Thomas’ Hospital, which was at that time located in the Borough, in Southwark.

St Thomas’ Hospital has been based in Lambeth since 1871, and a sub-ground-floor corner of an annexe called Gassiot House is home to the Florence Nightin­gale Museum.

Although the collec­tion here may not be as expansive as one might like – in part because Nightin­gale shunned the trappings of celebrity – it’s extremely stylishly arranged, thanks to a half-million pound grant from the Wellcome Trust’s Capital Awards scheme in 2010. The museum is basically one big room that has been divided into three ‘pods’, each devoted to a phase of Florence Nightin­gale’s life, work and legacy – before, during and after the Crimean War.

In addition to all the matters of life and death on display, there’s a handful of more frivolous items, including Florence’s pet owl, stuffed and perched on a branch. Not unlike the Elgin marbles, the little owl (Athene noctua) had been rescued from Athens and brought to England for safe­keeping, whence it never returned. Florence’s sister Parthenope handwrote and illus­trated a short book on the subject, entitled The Life and Death of Athena, an Owlet from the Parthenon.

A small space (with a thought-provoking video) is devoted to Mary Seacole, the Jamaican-born nurse/herbalist/hotelier/caterer who spent two years in the Crimea – though she did not work with Florence Nightin­gale, who seems to have disap­proved of her will­ing­ness to dispense alcoholic beverages to soldiers. Mary Seacole died in Paddington in 1881. She is commem­o­rated by a statue in St Thomas’ Hospital’s garden, erected in 2016.

The museum also honours the work of Edith Cavell, the Red Cross nurse who was shot by a German firing squad in 1915 on the orders of the Governor General of Brussels. Cavell’s pet dog Jack was embalmed and mounted after his death in 1923 and is on loan here from the Imperial War Museum. Jack is shown centre-right in the group of images below.

Like many of London’s smaller museums, there’s a strong emphasis here on educa­tional features, aimed mainly at young­sters – and there’s a profusion of peepholes, through which to view various photographs and film clips. School groups are often in atten­dance (and the sessions are booked up months in advance) so beware if you’re allergic to kids. Before being set various obser­va­tional and partic­i­pa­tive tasks, primary school children get an inspiring talk from an actress playing ‘Miss Nightin­gale’. I overheard such a perfor­mance when I visited for Hidden London, and was very impressed. There’s a more grown-up programme of educa­tional activ­i­ties for secondary school children. 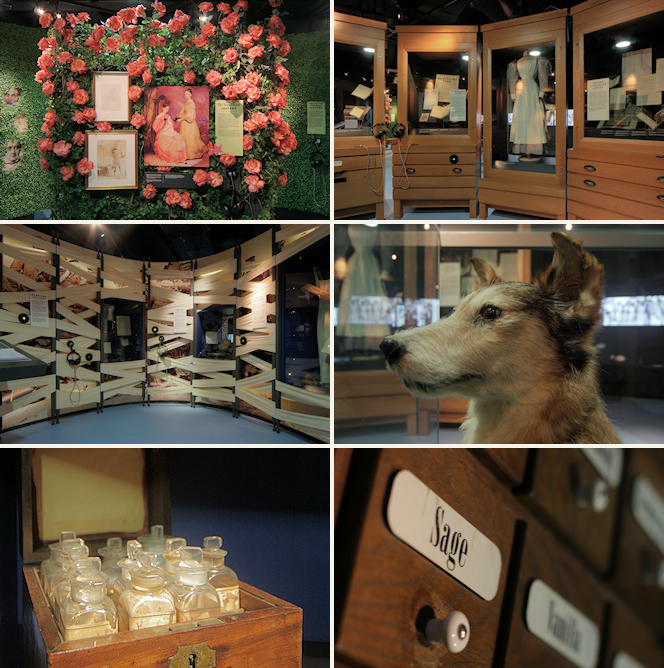