By the early 19th century the unceasing growth of London’s popu­la­tion had led to over­crowding in its church grave­yards. Not only did this make burials increas­ingly undig­ni­fied affairs but many people believed some sort of noxious vapour or ‘miasma’ rose into the air from the decom­posed corpses, spreading diseases.

In 1832 Parlia­ment passed the first in a series of laws that permitted burial grounds to be estab­lished on a commer­cial basis. Newly formed companies seized the oppor­tu­nity to create spacious, verdant and ‘hygienic’ ceme­teries at what were then semi-rural locations on the edge of the city.

The Metro­pol­itan Inter­ments Act of 1850 and its successor the Burial Act autho­rised municipal author­i­ties to open their own London ceme­teries but for two decades profit-making busi­nesses had the market in non-church­yard burials to them­selves. The earliest and grandest of their creations were memorably dubbed the Magnif­i­cent Seven in Hugh Meller’s London Ceme­teries: An Illus­trated Guide and Gazetteer, a defin­i­tive work now in its fifth edition.

Forming a ring around what is now inner London, the Magnif­i­cent Seven are: Kensal Green, Highgate, Abney Park, Tower Hamlets, Nunhead, West Norwood and Brompton. Nunhead is among the largest but least visited of the sepul­chral septet. Its expansive lawns and sweeping, tree-lined avenues were laid out in 1840 by the London Cemetery Company, which a year earlier had created the Cemetery of St James, Highgate. The company’s two prop­er­ties were conceived as a pair, located on hillsides facing each other across London, with St Paul’s Cathedral midway between them.

Nunhead can’t match the roll call of famous names on Highgate’s tomb­stones but those who know south London’s history may recall the phil­an­thropic gas magnate George Livesey and the bus tycoon Thomas Tilling. A granite obelisk commem­o­rates Scottish parlia­men­tary reformers who were charged with sedition and trans­ported to Australia. The weeping angels and lions’ heads of other imposing memorials mostly honour wealthy indi­vid­uals who have left no lasting mark on the world.

The cemetery contains 580 Common­wealth burials of the First World War, some marked with indi­vidual head­stones and the remainder commem­o­rated by name on a screen wall.

Despite occa­sional initia­tives such as the construc­tion of a new south entrance, Nunhead declined in prestige and prof­itability over the course of the 20th century. During the Second World War its iron railings were removed and the Dissenters’ chapel suffered irreparable bomb damage and was later demol­ished. Facing bank­ruptcy in 1960, the London Cemetery Company was absorbed into the larger United Cemetery Company, which finally gave up on Nunhead nine years later. With its gates locked but railings gone, the cemetery succumbed to the inex­orable power of nature and the destruc­tive effects of vandalism and theft. The Anglican chapel was set on fire and the catacombs were raided for lead and jewellery.

In 1975 a special act of Parlia­ment enabled Southwark council to buy the site for one pound. With the assis­tance of lottery funding in the late 1990s, the Friends of Nunhead Cemetery (FONC) renovated the ruined chapel, restored the gates, walls and railings, repaired 50 memorials, laid new paths and cleared much of the overgrown landscape – though extensive swathes of wilder­ness remain, like the one in the photo­graph below. The cemetery reopened to the public in 2001. The whole 50-acre site is now a conser­va­tion area and grade II* historic park, and part is a nature reserve with a diverse variety of flora and fauna.

The FONC organises regular conser­va­tion work for volun­teers and conducts a guided tour of the cemetery on the last Sunday of each month, starting from the Linden Grove gates at 2.15pm. 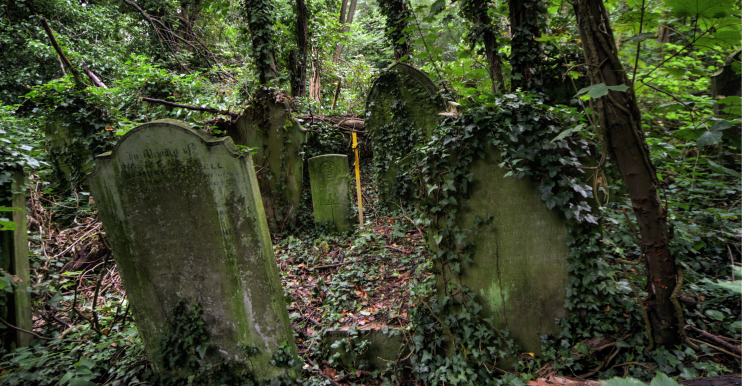