A conservation area in north Enfield, situated on the edge of open country west of Forty Hill 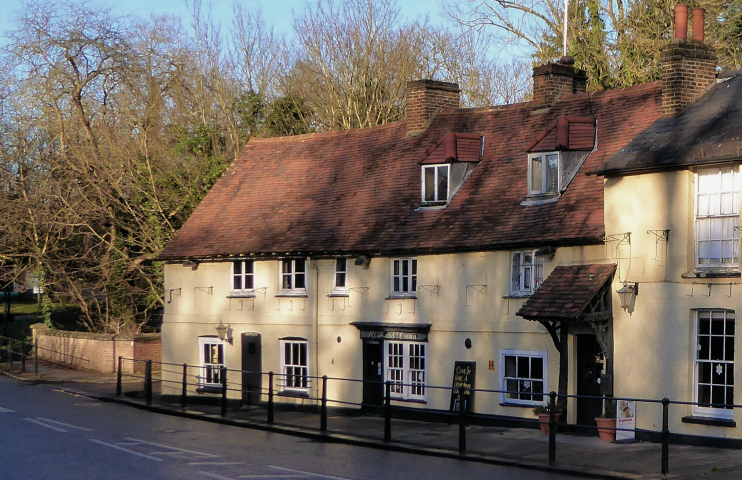 Although seemingly self-explana­tory, Clay Hill’s name may not derive from the sedi­men­tary deposit but from the surname of a medieval resident. The wider area is indeed formed of London clay but the distinc­tive char­ac­ter­is­tics at Clay Hill are patches of pebble gravel.

The Rose and Crown inn lay at the heart of the hamlet from when it was first built, which may have been as long ago as 1572. At that time, the road and the settle­ment were known as Bridge Street, but both had become Clay Hill by 1754. By then, the inn’s timber frame had been concealed behind a brick-faced front (which has since been painted) and it was extended to the east in the 19th century. The original part of the Rose and Crown is shown in the photo­graph above.*

Beggar’s Bush fairs were held at the top of Clay Hill in the 1770s but later returned to Southgate, where they had first begun.

The church of St John the Baptist was built in 1858 but was soon closed for a while by the Bishop of London after James Whatman Bosanquet of Claysmore complained about “myste­rious mutter­ings” of a popish nature.

Clay Hill House, now an old people’s home, was built around 1860 for Joseph Toms of the Derry and Toms depart­ment store in Kensington.

The improve­ment of railway services to Enfield Town in the early 1870s brought house­building to the south side of the hill later in that decade.

The opening of a station at Gordon Hill in 1910 made the locality even more appealing to devel­opers but Enfield council stepped in and bought 62 acres of Park Farm, which it opened as Hilly Fields Park in the following year.

Claysmore burned down in 1930 but the 18th-century Claysmore Lodge remains.

Clay Hill is traversed by the Turkey Brook and local volun­teers have laid a boardwalk through a partic­u­larly muddy part of the woods. There are eques­trian facil­i­ties at Kingswood and Brayside Farm, North Enfield Cricket Club’s ground is on Stray­field Road and Beggars Hollow is the access point for Whitewebbs golf course.

The Bosanquets of Clay Hill were a distinguished Huguenot family. Bernard Bosanquet played cricket for England in the early 20th century and is credited with having invented the googly. His son Reginald became well known as a television newsreader in the 1970s.

* The pictures of the Rose and Crown and St John’s church are adapted from original photographs, copyright Andrew Bowden, at Flickr, made available under the Attribution-ShareAlike 2.0 Generic Licence. Any subsequent reuse is hereby freely permitted under the terms of that licence.