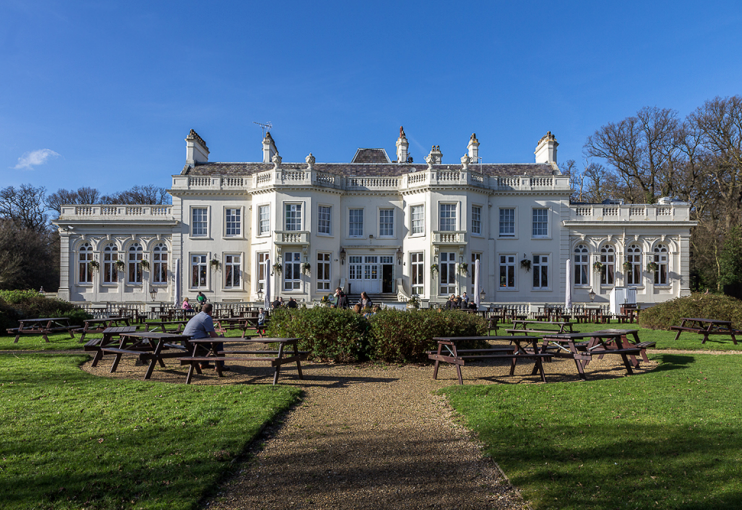 This was the estate of a family named Whitewebb, which had orig­i­nally meant ‘a weaver of white cloth’. A mansion called Whitewebbs (also spelt as White Webbs) stood here from the mid-16th century and in 1570 it was granted to Robert Huicke, physician to Henry VIII and Elizabeth I. A small group of cottages coalesced around the mansion over a period of decades. The Gunpowder Plot was said to have been hatched at Whitewebbs in 1605, though this claim is also made for Eastbury manor house in Upney, among other places.

Land to the north of Whitewebbs Road became part of Theobalds Park on its enclosure in 1611 and was later turned over to farming. Following the much later enclosure of Enfield Chase, Dr Abraham Wilkinson estab­lished the 134-acre Whitewebbs Farm, which he subse­quently enlarged, demol­ishing the old mansion and building a new one in 1791. Shown in the photo­graph above,* this Whitewebbs was réor­ganisé in the style of a French château in 1881.

A pumping station was built in 1898 to feed a loop of the New River and is now home to Whitewebbs museum of transport, which also hosts antiques fairs, model railway exhi­bi­tions and other events. The museum is usually open on Tuesdays and the last Sunday of each month.

Enfield council purchased the Whitewebbs estate from Sir Duncan Orr-Lewis in 1931 and divided it into a municipal golf course and a 196-acre public park, with open space and ancient woodland in which there are streams and small lakes. After the sale, Whitewebbs House served for many years as an old people’s home but is now a Toby carvery. 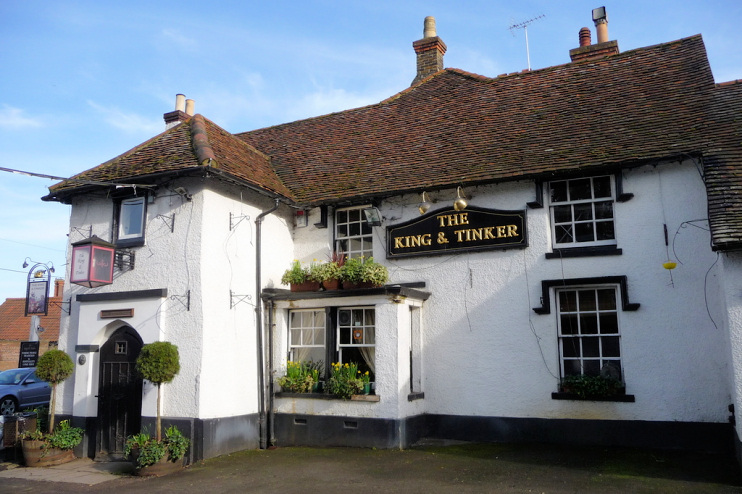 Shown in the photo above, the King and Tinker public house probably dates from the reign of James I (1603–25), though it was altered in the 18th and 19th centuries. Its name derives from an old ballad that tells of an occasion when King James is separated from his courtiers while out hunting and takes refuge in an alehouse, where he sets to drinking with John of the Vale, a mender of kettles. John is unaware of his compan­ion’s exalted identity until James reveals himself and (for no good reason) makes the tinker a knight. The encounter is usually said to have occurred in Windsor Forest or out here on Enfield Chase.

Either way, this pub is certainly named after the ballad, but that’s as far as the true story goes. As Thomas Percy observes in his Reliques, “It has been a favourite subject with our English ballad-makers to represent our kings conversing, either by accident or design, with the meanest of their subjects.” FJ Child adds: “It is obvious that a legend of immemo­rial antiquity has been trans­ferred by succes­sive minstrels or story-tellers to the reigning monarch of their own times.” And in The Old Inns of Old England, Charles Harper points out that “Haroun-al-Raschid is found, in the Arabian Nights, in circum­stances not dissimilar.”

Three hundred yards north-west of the King and Tinker, the 17th-century, hipped-roofed Whitewebbs farmhouse and its outbuild­ings (which include a later-17th-century timber-framed barn) have recently been renovated and the gardens have been reland­scaped, perhaps with the aim of adding another million or so to the asking price.

* The pictures of Whitewebbs House and the King & Tinker on this page are adapted from original photographs, copyright Christine Matthews, at Geograph Britain and Ireland, made available under the Attribution-ShareAlike 2.0 Generic Licence. Any subsequent reuse is hereby freely permitted under the terms of that licence.