A triangular open space and its neighbouring housing at the fork of London Road and Streatham Road, in north Mitcham – with several dubious stories attached 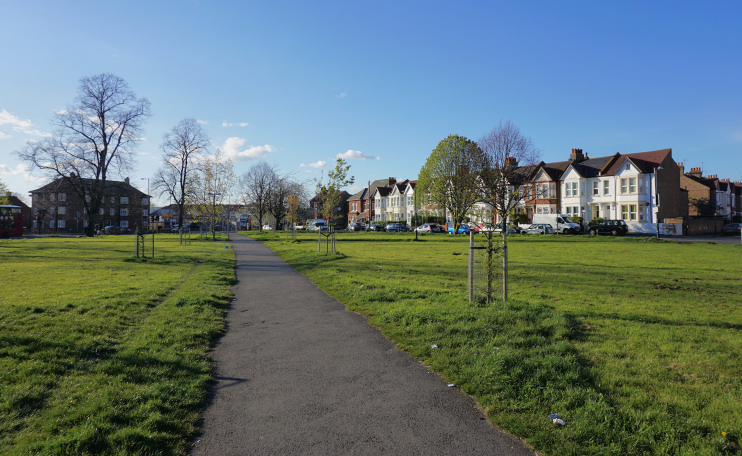 Figge’s Marsh is nine miles from London, according to its 18th-century milestone, which is rumoured to have been removed during the Second World War in case German planes landed here and realised how close they were to the city centre.

Despite sugges­tions by some authors that the name is a corrup­tion of Pigs’ Marsh, it was in fact named after William Figge, who from the 1350s held Pound Farm in sergeantry to the king. Present-day Carling­ford Gardens and Manship Road mark the boundary between Figge’s property and that of the medieval Biggin Farm estate. Swain’s Farm also stood near here and market gardening was carried on.

Daniel Defoe is said to have lived in a house on London Road near Figge’s Marsh around 1688, when he was serving as a Pres­by­terian minister in Tooting, but this whole story is somewhat suspect. Never­the­less, roads to the north-west of the locality have been given names connected with Defoe’s story of Robinson Crusoe.

In Defoe’s time, a plague pit is said to have been dug on the marsh but there is scant evidence for this (as is the case with many alleged London plague pits).

Another tall tale of Figge’s Marsh revolves around sightings of the semi-legendary Spring Heeled Jack† on Streatham Lane (now Road) in the 1870s, more than two decades after his heyday. A local posse was got up in a vain attempt to catch him. 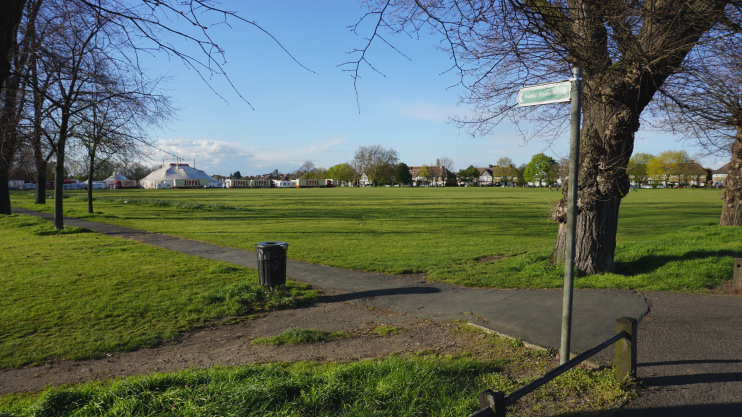 The Little Graveney Stream ran alongside Figge’s Marsh until the early 20th century, when it was culverted and covered over. The only signs of it now are a few manhole covers on the pavements of roads such as Carling­ford Gardens.

As part of Mitcham Common, Figges Marsh was used for grazing until 1923 when the urban district council assumed control. Most of the land was left as meadow until mechan­ical mowing became possible in the 1940s. Around this time, the surrounding area began to be built up with housing, much of which was erected by the council.

The ward of Figge’s Marsh has a rela­tively high propor­tion of house­holds renting from the council. It has signif­i­cant black and Asian minori­ties. Figge’s Marsh is one of Merton’s priority wards for action on areas of social concern, such as the welfare of lone parent families.

† Spring Heeled Jack was an almost certainly imaginary character who was sighted in various locations throughout Victorian England. In contrast with the axe murderers of modern urban myths, Jack behaved primarily as a prankster, scaring travellers by appearing out of nowhere and then bounding away in great leaps, often sideways. He was also said to possess devilish physical characteristics and to wear skin-tight apparel. Most of the early sightings were in the London area, including an appearance on Clapham Common in October 1837. As stories of his deeds spread, eye-witness reports increased, with embellishments such as the molestation of terrified servant girls, sometimes with added fire-breathing. Spring-Heeled Jack was spotted in an arc of London suburbs in 1838, from Ealing in the west, through all the major districts of inner south London, to Bow and Limehouse in the east. After a few months of mass hysteria London sightings abated but similar stories were reported from the provinces and in November 1845 he was held responsible for the death of a young prostitute in the Folly Ditch, in Bermondsey.

* The pictures of the path on Figge’s Marsh and Zippos Circus on Figge’s Marsh on this page are both adapted from original photographs, copyright Bill Boaden, at Geograph Britain and Ireland, made available under the Attribution-ShareAlike 2.0 Generic Licence. Any subsequent reuse is freely permitted under the terms of that licence.