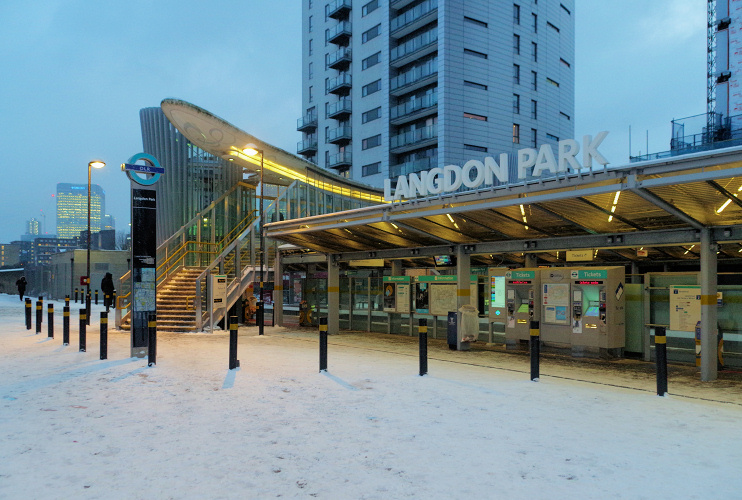 Well into the first half of the 19th century there was almost nothing here except a track called Bow Lane (now St Leonard’s Road and Uamvar Street), which led to Bromley-by-Bow’s parish church of St Mary with St Leonard.

Most of the locality was densely built up with terraced housing after the North London Railway opened in 1850. At this time there was a signif­i­cant Irish community living here.

The church of St Michael and All Angels was built in 1864–5 in Early English Gothic style with poly­chrome detailing and a prominent tower that forms a local landmark. The church could seat a thousand worshippers.

St Michael and All Angels’ boys’ school was in existence by 1870 and it had become Byron Street school by 1882. Rebuilt in 1907, the school was later renamed in honour of Edmund Hay Currie.

From 1884 until 1944 South Bromley station stood at the eastern end of Rifle Street.

Poplar borough council built the low-rise Teviot estate after the Second World War and added a group of nine-storey blocks in 1954–6.

In 1959 the Blackwall Tunnel northern approach road was constructed parallel to St Leonard’s Road and large areas of the neigh­bour­hood were cleared. The approach road effec­tively divorced this locality from the rest of South Bromley.

A recre­ation ground was created in stages from the late 1950s in place of the houses of Cobden Street and Woodin (formerly Wellington) Street, many of which had been damaged in the Blitz. It’s not clear to Hidden London why the name Langdon Park was chosen for this new open space but it may have honoured Father CG Langdon, who was vicar of St Michael’s church in the 1920s. Langdon was a pacifist and a socialist, involved with George Lansbury and the Poplar rates rebels. In 1965 Hay Currie school absorbed Lime­house’s Sir Humphrey Gilbert school and became Langdon Park.

St Michael and All Angels’ church was declared redundant in 1978 and later became the flats of St Michael’s Court. The conver­sion involved major changes to the interior, “which is now deprived of special interest,” according to the building’s grade II list entry.

By the late 1980s the Teviot estate had acquired a miserable repu­ta­tion for isolation and poverty – and for white racism directed against the area’s growing Bangladeshi community. At one time the estate was said to have had the highest incidence of racial attacks in the country. 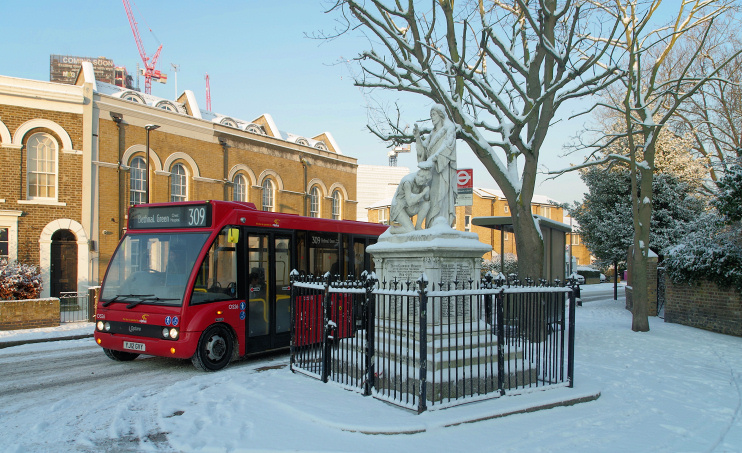 The Langdon Park conser­va­tion area was desig­nated in 1990 and extended to the north-west in 2008. Its focal (though not central) point is St Michael’s Court, together with its grounds and the former vicarage. The photo above shows the grade II listed war memorial (1920) in front of the vicarage and, to its left, a locally listed terrace of Georgian-style houses built in the 1850s. Dating from the same period, the former St Leonard’s Arms is also locally listed. The pub closed in 1988 and was converted to flats in 2002.

Created as part of the ‘sustain­able commu­ni­ties initia­tive’, Langdon Park station opened in 2007. Local coun­cillor Kevin Morton called the £7 million project, “a key step in breaking down the social Berlin Wall between Poplar and Docklands.” Inci­den­tally, when the station was first mooted – back in 1983 when the DLR was orig­i­nally being planned – it was to have been called Carmen Street, which is an indi­ca­tion of how ‘nameless’ this locality was at the time.

Langdon Park school is now a mixed community compre­hen­sive that draws its students from a rela­tively local catchment area. In 2016 Ofsted reported that the majority of the school’s pupils were of Asian or Asian British heritage – a change from previous reports, which had found a more even mix of white, black and Asian ethnic back­grounds. The 2016 report also noted that “a far higher than average propor­tion of pupils [are] eligible for the pupil premium (addi­tional govern­ment funding for disad­van­taged children and children looked after).” English was spoken as an addi­tional language by 85 per cent of pupils in the 2016–17 academic year.

After having been expelled from four other schools, the hip-hop artist Dizzee Rascal attended Langdon Park, where he was apparently excluded from every class except music. Encouraged by his teacher, he began making music on the school’s computer. “What emerged from Langdon Park’s music room may well be the most original sound heard in British music for the best part of a decade,” wrote Alexis Petridis in the Guardian in 2003.

* The pictures of Langdon Park DLR station and the war memorial on St Leonard’s Road on this page are slightly modified from original photographs, copyright Matt Buck at Flickr, made available under the Attribution-ShareAlike 2.0 Generic Licence. Any subsequent reuse is freely permitted under the terms of that licence.