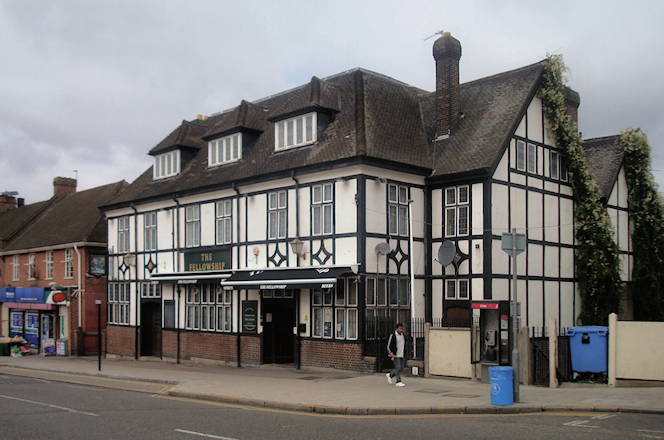 This place was first iden­ti­fied in 10th-century Anglo-Saxon charters as Beringaham. The name probably denoted ‘the homestead or water meadow of Bera’s people’ – and Bera (or Beora) may have been a nickname meaning ‘the bear’. By 1198 it was Belingeham. The change from ‘Ber-’ to ‘Bel-’ was influ­enced by Norman orthography.

Alfred the Great’s daughter Elfrida gave the whole of the manor of Lewisham to the abbey of St Peter at Ghent – and the sub-manor of Bellingham was later sold on to the Cister­cian abbey of Stratford Langth­orne. For many centuries very little activity occurred here other than riverside milling and inland farming. The nearest hamlet was Southend, which lay a little to the south-east.

The opening of the station in 1892 revived the almost forgotten Bellingham identity but failed to stimulate any devel­op­ment in its immediate vicinity. Leland Duncan listed centuries of local landowners in his History of the Borough of Lewisham, published in 1908, but found very little to actually see here: “At Bellingham the altitude of the valley-plain is 70 feet. The slope on the arable land to the east rises sharply to 100 feet. At the top of the ridge which there forms the sky-line a solitary tree is seen a little to the north of a wood.”

In an early sign of life in the neigh­bour­hood, Bellingham bowling club was estab­lished on Bellingham Road in 1912 – and the Forster estate was begun to its north around the same time.

After the First World War, Lewisham council planned to build housing on the farmland south of the conflu­ence of the Pool and Ravens­bourne rivers. The prime intention was to ease inner-city over­crowding by moving people here from Deptford and Bermondsey.

The borough’s subse­quent failure to deliver on its commit­ment prompted the London County Council to step in and construct a ‘cottage estate’ between 1920 and 1923. St Dunstan’s church was built on the east side of the hexagonal Bellingham Green in 1925 – but was never completed as orig­i­nally planned.

The 17th-century weath­er­boarded and timber-framed farmhouse of Bellingham Farm was demol­ished in 1932 and its site disap­peared beneath Allerford and Waterbank Roads. Blocks of flats were erected south of Southend Road in the late 1930s. The archi­tects Shepheard Epstein Hunter were respon­sible for a final phase of municipal infilling in the mid-1970s.

By the late 20th century the estate was suffering from neglect and the Bellingham Community Project was estab­lished to co-ordinate a variety of neigh­bour­hood activ­i­ties and renewal projects. The most signif­i­cant permanent results have been the construc­tion of a ‘leisure and lifestyle centre’ (opened 2004) and the Gateway youth and community centre (2006).

In 2014 Phoenix Community Housing announced its plans to rein­vig­o­rate the estate’s run-down grade-II listed public house, the Fellow­ship. With extremely generous support from the Heritage Lottery Fund’s Heritage Enter­prise programme, the main bar area was restored and the pub reopened in June 2019 as the Fellow­ship and Star. This incar­na­tion did not survive the covid pandemic but the pub re-reopened in September 2022 as the Fellow­ship Inn, run by Homegrown Pubs. Other parts of the mock-Tudor building have been converted to a cinema and a music rehearsal space.

The Fellow­ship Inn is shown (before restora­tion) in the photo­graph at the top of the page* and its location is marked with a pin on the map below.

The boxer Henry Cooper lived on Farmstead Road from 1940 to 1960. In 1963 he trained for his fight with Cassius Clay (later known as Muhammad Ali) in the Fellowship Inn’s ballroom, which was temporarily converted into a gymnasium. “It was quite an event in Bellingham,” Cooper later recalled.