A broad, stuccoed street in southern Maida Vale, running north-westwards from the Harrow Road at Little Venice to Sutherland Avenue 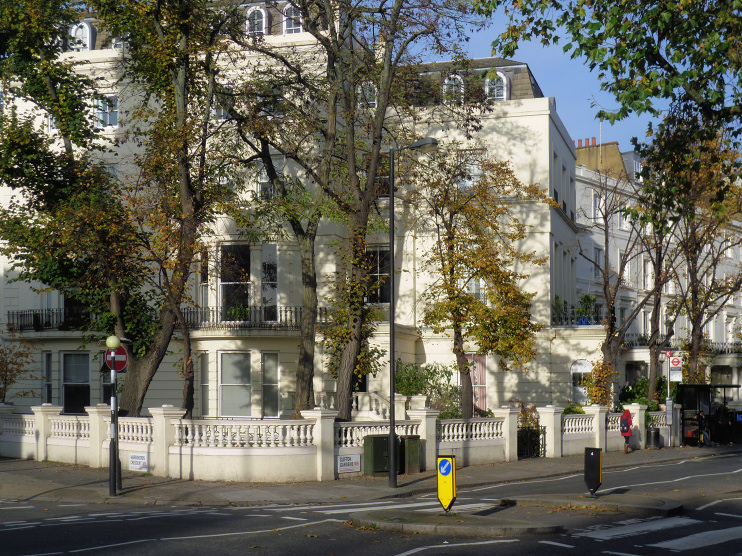 This was orig­i­nally a track called Green Lane and was named Warwick Road (later changed to Avenue) on the street plan produced in 1827 by George Gutch, surveyor to the Bishop of London.

Gutch named the road after Jane Warwick, of Warwick Hall near Carlisle, who had married into a landowning family here in 1778.

The first houses – some of which were very large – were erected in the 1840s close to the Warwick Avenue bridge over the Paddington arm of the Grand Junction (now Grand Union) Canal. The neigh­bour­hood was mostly built up within two decades and the majority of the original prop­er­ties survive today.

St Saviour’s church on Warwick Avenue was conse­crated in 1856 and its section of the road was widened to create a grand approach, making this perhaps the broadest avenue in London. The church, however, was never wealthy, partly because the area acquired such a large Jewish community.

With all this construc­tion activity, nearby Welford’s dairy – dairymen to Queen Victoria – had to send its cattle to fields in Willesden and Harlesden, and the dairy building relocated to new premises at the corner of Shirland Road and Elgin Avenue in 1882. One of London’s few surviving cabmen’s shelters was built on the avenue around this time.

Warwick Avenue station opened in 1915 as an inter­me­diate stop on the Bakerloo line’s new extension from Paddington to Queen’s Park. The station was orig­i­nally to have been called Warrington Crescent and it is perhaps surprising that it has not since been renamed Little Venice, given that local­i­ty’s cachet.

St Saviour’s – which is now the parish church of Little Venice – was rebuilt in 1976 in a project that incor­po­rated the new flats of Manor House Court. There are shops on Formosa Street, which crosses the northern part of the avenue.

David Ben-Gurion, the first prime minister of Israel, lived at 75 Warrington Crescent in 1920.

Early punk musician Matt Dangerfield converted his basement flat on Warrington Crescent into a recording studio in the mid-1970s. The Damned, The Clash, Generation X and the Sex Pistols are said to have made their first recordings here.

’, taken from the album Rockferry

, was a major international hit. The video featured the Welsh singer-songwriter leaving Warwick Avenue tube station in a black cab and a flood of tears.

* The picture of Clifton Gardens on this page is slightly modified from an original photograph, copyright Marathon, at Geograph Britain and Ireland, made available under the Attribution-ShareAlike 2.0 Generic Licence. Any subsequent reuse is freely permitted under the terms of that licence.