A ‘cottage estate’ in north Tottenham, built by the London County Council between 1903 and the 1930s 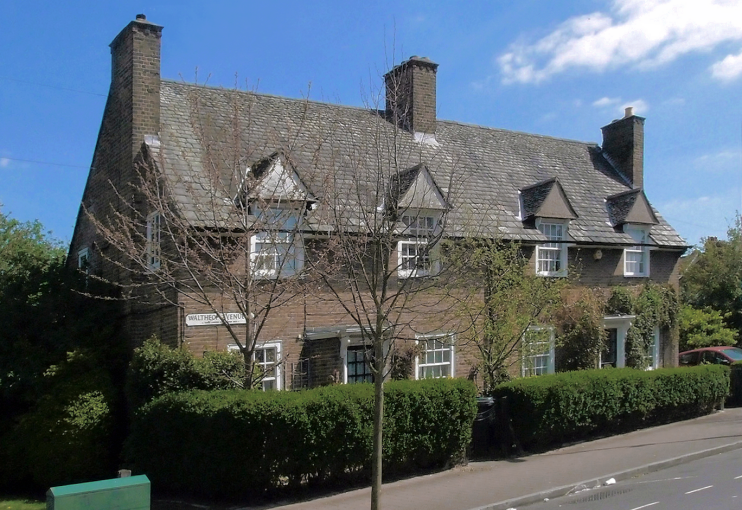 In the early 17th century all the fields here were part of the demesne lands of Awlfield Farm. Most of the area within what is now the arc of the Roundway was iden­ti­fied on the Earl of Dorset’s map as the Awle Fields. Awlfield Avenue now runs along what was once the eastern edge of Little Awle Field. Awlfield farmhouse stood imme­di­ately south of All Hallows church. The farmhouse was replaced in 1620 by the house that became known as the Priory, and is now All Hallows vicarage.

The locality now known as Tower Gardens remained open farmland until 1901, when the London County Council, using powers made available to it under the Housing of the Working Classes Act (1890), bought a 225-acre tract of land south of White Hart Lane at the edge of Totten­ham’s border with Wood Green.†

Starting from Lordship Lane and working north­wards, the council began to lay out a cottage estate of two-storey houses in red or yellow London stock brick. The LCC used the term ‘cottage estate’ quite loosely at that time, in reference to any devel­op­ment consisting mainly of small houses rather than blocks of flats – but here many of the dwellings were built in genuinely cottagey styles. The council’s chief architect William Edward Riley led the design team in the project’s early phases.

The homes were constructed to high standards, with varied details and materials, heavily influ­enced by the Arts and Crafts movement. The fulfil­ment of the archi­tec­tural ideals took different forms through the project’s many phases – according to the funding available; whether the Progres­sives or Moderates were in charge of the LCC; the changed circum­stances after the First World War and the examples newly set by other projects (from Becontree to Belgium).

The first 141 homes were completed in 1904 but tenants were initially thin on the ground. Those that did move here tended to come from elsewhere in the Tottenham and Wood Green area, rather than from inner London as had been intended.

The LCC chose to model the next phase of devel­op­ment on the ‘garden suburb’ (orig­i­nally ‘garden city’) prin­ci­ples espoused by Ebenezer Howard, which were just beginning to take physical shape in Letch­worth, Hert­ford­shire. Later, the LCC’s thinking was also influ­enced by the work of Raymond Unwin at Hampstead Garden Suburb, under Henrietta Barnett’s patronage.

However, some of the garden suburb ideals – espe­cially those related to housing density – required greater expen­di­ture than the LCC could afford. At this point the banker Sir Samuel Montagu rode to the rescue, bearing a gift of £10,000 – more than a million in today’s money. His one condition was that the council should give pref­er­ence to rehousing Whitechapel residents here. Though the proviso was osten­sibly secular, Montagu’s prime motive was to help Jewish East Enders move out of their over­crowded slums and make a new start in healthier surroundings.

With the assis­tance of Montagu’s money, houses were endowed with more amenities and bigger backyards – and the estate gained its own park, Tower Gardens, which had a fountain, tennis courts and a bowling green, surrounded by raised terraces and flower beds. The gardens were named after Whitechapel’s parent district, Tower Hamlets.

Presum­ably in a nod to the only pre-existing thor­ough­fare, Lordship Lane, most of the estate’s streets were named after histor­ical lords of the manor and sub-manors of Tottenham. Sir John Risley, for example, became lord of Tottenham manor in 1507.

These were the main phases and events in the evolution of Tower Gardens and the neigh­bouring locality:

Nowadays, many Tower Gardens homes are owner-occupied, although renting from the council is still the most common form of tenure.

The local­i­ty’s popu­la­tion is socio-econom­i­cally and ethni­cally diverse. Roughly as many residents possess a higher educa­tional qual­i­fi­ca­tion as have no qual­i­fi­ca­tions at all – by contrast, for example, with Crouch End, where that ratio is ten to one. Around 60 per cent of Tower Gardens’ residents were born in the United Kingdom, with the remainder having come from a wide variety of countries, including Turkey, Ghana, Jamaica, Poland and India.

* The pictures of the housing terrace, Waltheof Avenue, Tower Gardens Road, and the corner house, Tower Gardens estate on this page are adapted from original photographs, copyright Julian Osley, at Geograph Britain and Ireland, made available under the Attribution-ShareAlike 2.0 Generic Licence. Any subsequent reuse is hereby freely permitted under the terms of that licence.